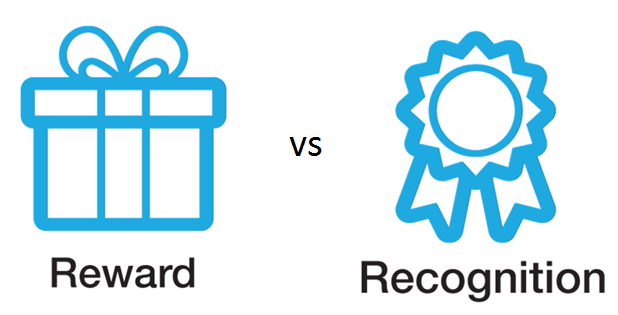 You want to motivate and inspire your employees so they’ll want to perform well and be productive members of your firm. Even if your company is small and your budget limited, you can still improve your employee advocacy efforts using reward and/or recognition. Finding a balance between both the two is important. It is usually not an “either or” situation. Let’s understand the key differences between reward and recognition so we can decide what to use in what event:

1. Reward is tangible, recognition is not. Reward is generally monetary such as commission, bonus, salary raise or a gift card. Recognition, on the other hand, is often not visible and yet can be of significant value. It seeks to decorate the achiever. Example: higher title or designation, badge of honor, control.

Rewards are consumable whereas recognition is experienced.

2. Reward is transactional in nature, recognition tends to be relational. If a person or group does “XYZ” then they get “ABC” in return. That is a reward. Recognition is more of a relational exchange between people. From the company’s point of view, rewards are great for attracting people to an organization, and recognition is perfect for keeping them.

4. Rewards can be conditional, recognition is usually not. Rewards are a direct result of certain achievement or goal. It is therefore often expected. Recognition can be both – consequence of a fixed result or not a so expected result of prior work and sudden.

In short: Both reward and recognition have positive influence on receiver’s psychology. Reward is economic, short-term therefore less personal. Recognition, on the other hand, celebrates the person or group of people that has attained a certain level or acquired significance as part or result of ongoing effort.

This article was contributed by Reema Mehta.