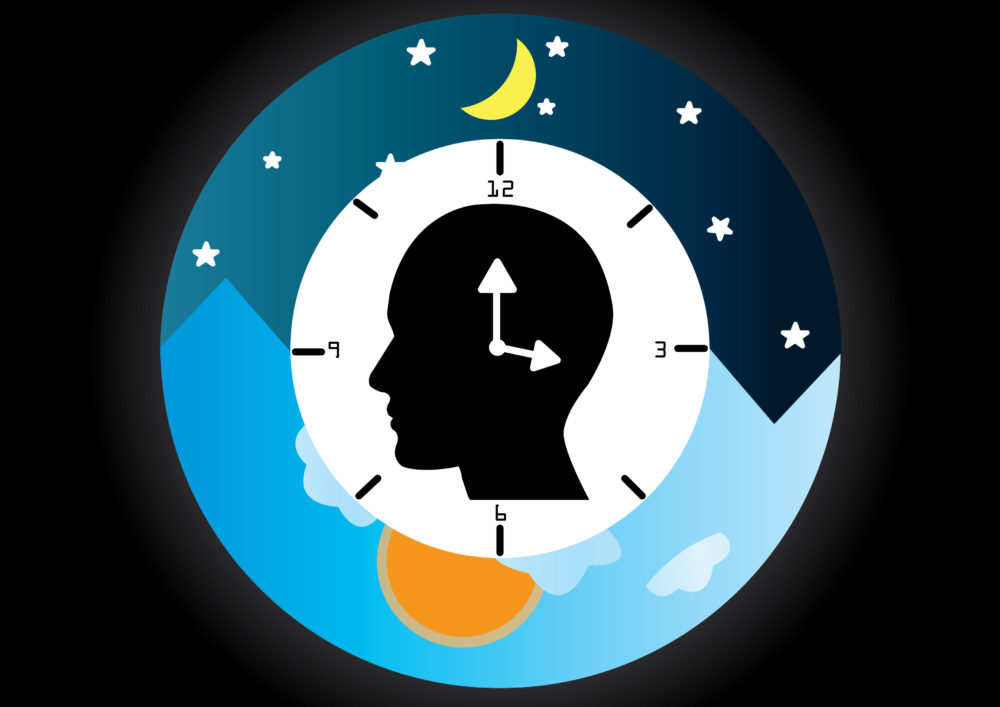 Ever wonder why new born infants stay awake and active during night but sleep during day time?

Body clock or Circadian rhythm is what enables us to synchronise the working of our body with the day and night. The actual ‘clock’ is a cluster of around 10,000 nerve cells that lie buried deep within a part of the brain called the hypothalamus. Light coming in through our eyes ‘trains’ the body clock to keep in time with day or night and resets it slightly every day.

Your body has an internal clock that makes you feel sleepy at night and awake during the day. Even though there are 24 hours in a day, this clock is actually on a slightly longer cycle (24.1 hours).

The production of rhythms is complex. But we can sum things up as follows: special clock genes in the Supra Chiasmatic Nucleus (SCN) switch on which leads to protein production. As these proteins accumulate, along with other chemicals, they switch off the clock genes. The level of proteins then drop to point where the genes are able to switch on again and the cycle restarts. This cycle of switching off and on happens about once every 24 hours. The SCN sends out signals to the rest of the body that vary according to this cycle. The cycle is not just determined by the SCN itself: it responds and adapts to signals from outside the body (principally light and dark) to keep the organism synchronised with the world around it – that is, ticking at the right time.

It is with the stimulation of the SCN, that the pineal gland in the brain produces a hormone called melatonin which tells our body to sleep…..

A newborn’s biological clock is immature. It takes time for a baby to develop his own natural circadian rhythm as it had stayed in dark for 24/7 in the womb for a long time.  Sleep patterns develop with time, and as the baby gets older, her biological clock and nervous system matures, which makes it get on a routine.

Then what happens when a person is experiencing a jet lag due to long distance travels? The answer to this is also the same. Bright light can help us to reset our circadian rhythms according with the new time zone.

A quote from Sam Levenson to go with this article –

“Don’t watch the clock; do what it does. Keep going.”

The above article was contributed by Shwetha. R. Bhat.