In today’s compact times when we come across someone new and want to add them to our social circle, the standard process of an exchange of phone numbers is usually padded with requests for personal and business email addresses in addition to “how can I find you on Facebook?”, “do you have a Twitter account?” questions. Very soon said person will also receive a LinkedIn invite possibly followed by an entreaty to add him or her to Skype. Add to this a plethora of other emerging and already entrenched modes of communication and information sharing: Instagram, Snapchat, WhatsApp, Viber, Tango etc. 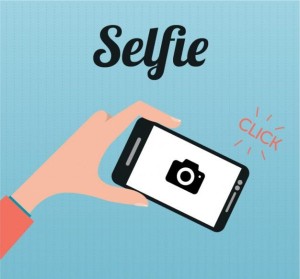 This intricate and lightening quick dance is mutually understood to not be unnerving in nature and will prevent either party from actualizing the possible notion of the other being a stalker (which makes it all the more difficult to spot the ‘actual’ creeps in our lives today).

When we are so readily willing to give out seemingly all access passes to our online social lives and are equally insistent that others hand out similar passes to their lives, it doesn’t come as a surprise that the volume of information that needs to be processed will at times manifest itself in other forms of communiques such as images.

The Selfie (yes double capitals are necessary) has taken over the world and is presently reigning as the Ruler of All Social Websites. We must treat the term as we would with the titles it hobnobs with such as Lady, Marchioness, Duchess, Princess, Queen. The Selfie has joined the ranks of nobility, aristocracy and royalty.

On the face of it (bad pun time), The Selfie provides a rich source of information to the onlooker. If they choose to look on for long, The Selfie gives its audience tonnes of information about the person who has taken The Selfie: what they like to eat, what they like to wear, how they exercise, who their friends are etc. are all conveyed in a matter of minutes through a series of personal portraits. Snapshots of an individual’s life broadcast for the benefit of their online community. Though it must be noted here that the use of the word “benefit” has been inserted with the loosest possible definition of the same.

We have all taken Selfies. We have all seen Selfies. We have commented on them. We have pressed the ‘Like’ button and all its equivalents in all the parallel sites. We have grieved most copiously over some Selfies that have made us come into contact with some of our more base personal characteristics such as envy and derision. There’s a song about it1. American talk show host Ellen DeGeneres took a selfie at the 2014 Oscars that was shared worldwide within minutes of it being taken and went viral2. The Oxford Dictionary chose ‘Selfie’ as its Word of the Year in 20133. In short we have encouraged The Selfie. We called it into being and we have nursed it through its infancy and now it seems The Selfie is here to stay in all its formidable power.

Which of course begs the question: Why? Why has The Selfie come into this world and why did we bring it in and continue to stoke its fire?

Right from the beginning The Selfie was borne from the minds of the common person. It wasn’t the result of an experiment conducted by social psychologists in a lab in some blingy prestigious university that launched theories about human social interaction; it wasn’t coined by cultural anthropologists or sociologists to describe an aspect of emergent urban behavior.

In fact, academia (read the elite) had no part to play in the formation of The Selfie. If you believe it (some don’t4), the first usage has been linked back to a drunk Australian man who typed the word in a post on the Australian Broadcasting Company about ten years ago. He very intelligently and gallantly denies having invented the word and says the slang term was commonly used back then to describe a photograph taken of oneself by oneself. The Australians are notorious for adding –ie to words to shorten them for slang purposes: mosquito- mozzie, Australian- Aussie. In lexicon world this is referred to as hypocoristics5 if you’re wondering.

While academicians may not have had a hand in the creation of the word, they have begun to study the concept. Some time ago a huge hullabaloo (have always wanted to use that word) was created in the online world about how excessive Selfie taking is a psychiatric illness and can be diagnosed thanks to its recent inclusion to the vast database of mental disorders that exist by the American Psychiatric Association6 . This led to massive re-tweets (another new word that has come into existence thanks to Twitter, along with the beloved #) and people diagnosing each other and themselves as suffering from selfitis- the official term given to the excessive Selfie taking disorder. Many agreed that this was inevitable and were just waiting when this phenomenon would be recognized for the illness that it always was.

Except that this news piece was satirical in nature and poked fun at us all. The American Psychiatric Association cannot just add disorders to its database. Their database is a physical book called the Diagnostic and Statistical Manual of Mental Disorders (DSM) which is now in its fifth avatar. The first DSM was published in 19527. Since then there have been only five more updates to the DSM. These guys don’t change things so easily. They need valid and reliable research, evidence and stuff8.

However, academics do enjoy social phenomenon almost more so that the rest of us plebes do so they have actually gone ahead and conducted some interesting studies on social media in general9. One of these studies pertains to The Selfie albeit indirectly and can go to some lengths to explain why we love The Selfie so. In an article published in The Times of India on 13th January 201510, a British study brought to light a concept called ‘netbrain’ which refers to an abuse of the internet- that is overusing it to the point of abuse. It has been found to be linked to “narcissism, distraction and a fear of missing out” and has an even greater reach because of smartphone technology.

The Selfie provides a perfect platform for our “netbrains” to process information that an individual wants to convey in ultra-fast mini doses. A quick Selfie of one’s smiling face looming in front of the Eiffel Tower tells everyone that you are vacationing in the City of Light. Similarly a sad face with a red nose lying down next to a box of tissues and a Vicks VapoRub dibiya tells me that you’re ill and prompts me to send you a get well soon message on WhatsApp. All this takes barely five minutes and loops back to what the British scientists discuss regarding the idea of the “netbrain”- we don’t want to miss out on telling the world about us and we don’t want to miss out on what the world is telling us because we’ve all become narcissists and want/need distractions. The Selfie has become an incomparable messenger of such information and will continue to be so as the world becomes smaller and more lives interconnect and criss-cross online.

While the definition of The Selfie remains the same as it did ten years ago in Mr. Aussie’s time perhaps the rampant use of social media combined with the bulk of information that is being generated and disbursed nowadays and instantly accessible in the form of smartphone technology, created the perfect oven for this bun of a baby term to bake away happily in, glisten goldly and aromatically inform every one of its presence back in the big bad world once it had risen and was ready to be consumed.

And so delicious was it that we haven’t been able to stop ourselves from indulging in The Selfie ever since.

7 DSM: History of the Manual. Retrieved January 17 2015 from: http://www.psychiatry.org/practice/dsm/dsm-history-of-the-manual

8 Grohol, J.M. Taking Too Many Selfies? Don’t Worry, It’s Not a Disorder. Retrieved January 17 2015 from: http://psychcentral.com/blog/archives/2014/05/28/taking-too-many-selfies-dont-worry-its-not-a-disorder/